skip to main | skip to sidebar

The trees are budding and the irises are blooming!
But, you sure wouldn't know it's Spring by the weather outside!

Temperatures are in the low 40's with a brisk north wind... Brrrrrrr....

Click on the snowman.
You will get a black page. Click your mouse anywhere (and everywhere) on the page then see what happens! Better yet, click (hold down) and drag your mouse over the whole page...

Enjoy!!
Posted by Jakey the Clown at 4:23 PM No comments: 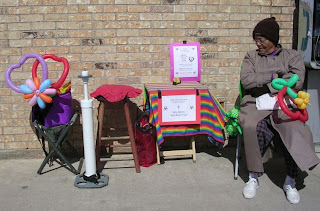 Ms. Ivie Flowers gave me a bag of brownies she had made. She makes a lot of brownies, cakes, breads, cookies and even cans jams and jellies. How fun would it be to hang out in her kitchen and get to lick all the bowls!

Ms. Ivie sells her baked goods every Saturday in front of the Dollar General in Elgin to raise money for her church. I set up next to Ms. Ivie to make balloon art to raise money for The Red Cross Haiti Relief Fund. She thought I was quite the colorful character - I made a new friend in Ms. Ivie!

I made Ms. Ivie a flower on a stem in a heart balloon, and she wore it on her arm all day long! She knew a lot of the people that came by and took the time to chat with them all.
“How are you today?” she would ask…

So, I chimed in and would ask: “How are you today? Ms. Ivie and I are doing great! We’re sweet and we’re funny – guess which is which??
Ha-ha!! She’s the funny one!!”
pointing to Ms. Ivie. Then we would both giggle!
Remembering how sweet and tasty those brownies were on my tongue… Well, my sweet tooth knows where to go on Saturday mornings!!
Posted by Jakey the Clown at 9:22 PM No comments: 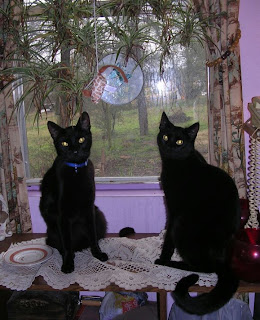 You two are now in your "terrible twos" 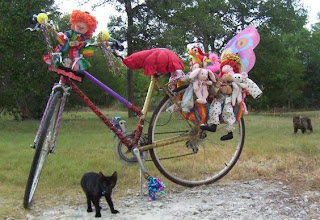 I thought I was the only one in Elgin, Texas who had their bicycle decorated! I did that to enter The Elgin Western Days Parade in 2008. It was a lot of fun arranging all of my stuffed animal friends to wave along with me as we followed the Parade route! Of course my furbabies helped me to put it together! In this picture Skratchy and Squeek are showing their approval!

I really didn’t expect to win the 1st Place Blue Ribbon – there were so many incredible entries – but I did!! Everybody else had elaborate floats, were on horseback, or had their trucks or tractors decorated.
I was the only one on a bicycle!! 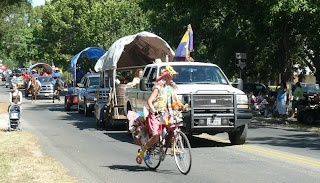 So, on Valentine’s Day 2010, I was much surprised to meet Mr. Weather! 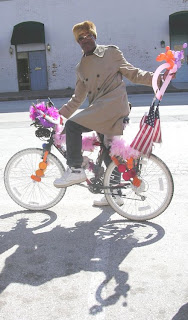 I made him 2 poodles kissing on a heart balloon, and attached it to his bicycle. He said he gave it to ONE of his girlfriends – Happy Valentine’s Day!

It seems there are a LOT of colorful characters in Elgin! 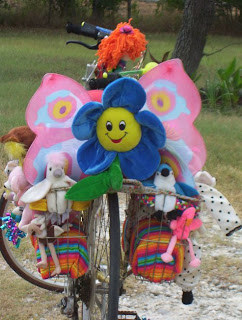 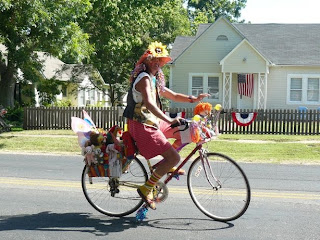 Posted by Jakey the Clown at 5:59 PM No comments: 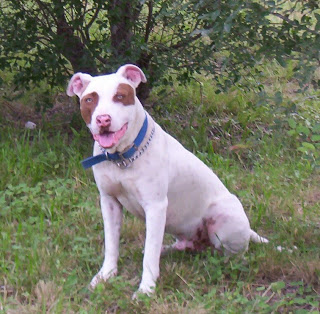 Showed up next door seeking the solace of fellow doggies. He was 3 months old, scared and ½ starved. Because he is a Pit Bull, I think that he had been treated mean to make him mean to participate in illegal dog fighting. He had run away…

I fed him through the fence for over a week, while he made friends with Pup and my neighbor’s doggies Demo and Teddy. I opened my gate for him to come inside, but he was so scared. It took 12 tries, but finally he entered the yard! I closed the gate and he has been here since. He and Pup became best friends, though Pup has always maintained being the alpha dog.

He remained a scaredy cat when it came to people. I would have to set his food bowl down and walk away before he would eat. It was obvious he had been horribly abused… I contacted a local dog trainer (Trish) who volunteered her services to help me with Freckles. The main goal was to get him neutered – I would adopt Freckles, but being a male Pit Bull, his being fixed was mandatory.

Trish is a true Dog Whisperer! She fell in love with Freckles and called him her “Sugar Bear”. After several tries she got him on a leash. I set up a fence inside the house so he would have a space to recuperate from his surgery. He was VERY scared. 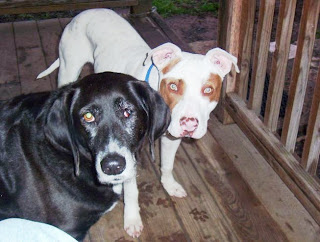 It took 6 months before he would come up on the porch.
He would take Pup’s lead to join in “Cookie Time”.
(Picture) It's Cookie Time!!
A lot of baby steps (some backwards), but after about a year and ½ Freckles began to trust and love me, knowing that I would not hurt him. He now comes inside every night and is a very loved member of the family! Freckles is very smart and SO sweet, doling out kisses to not only me, but Pup, Squeek, Skritch & Skratchy as well!

I gave Freckles the birthday of August 11th when he will celebrate his 3rd birthday!
Definitely a big juicy bone for my sweetie!
Posted by Jakey the Clown at 10:58 AM No comments: 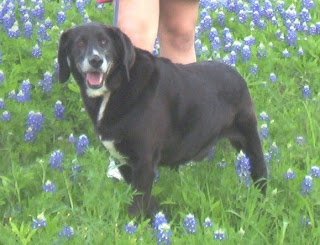 PUP
Everybody needs a picture of their kids posing in a field of bluebonnets!
My Pup showed up in the neighborhood when he was a year and a half old. Whether his previous owner had dropped him here, or if he was searching for a lady friend is unknown. He was definitely lost and very hungry! He made the rounds in the neighborhood and made a few human friends who gave him food and water - including me!
I had a doghouse out back and invited him to take up residence. He decided that he liked making his rounds. I would check to see if he was in the house every morning and also at night. Pup was a free spirit! Then one night when I checked to see if he was in the doghouse - he was!
But he had been hit by a car! I rushed him to the Vet, and Pup had a long recovery time. We managed to save his injured leg, but one of his eyes he ended up permanently blind in.
I then claimed Pup as my own, and he claimed me as his humom!
Pup is smart, and he is loyal! We love each other unconditionally (this is true with all my furbabies!). Can't leave the gate open though, because he will revert to making his rounds! Not in search of a lady friend though, thanks to Animal Trustees of Austin! I'm not Bob Barker, but I do encourage everyone to spay or neuter your pets!!
I gave Pup the birthday of August 18th when he will turn 11 years old!
I don't bake cakes for the doggies, but Pup will get VERY special treats on his birthday!!
Perhaps a T-Bone steak?
NEXT:
FRECKLES
Posted by Jakey the Clown at 10:30 AM No comments: 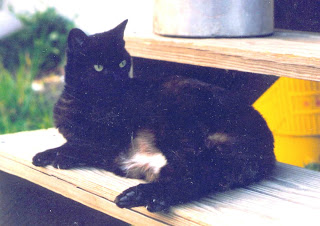 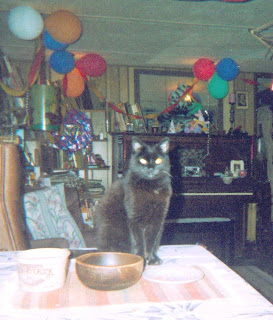 Mama Mia's 17th Birthday Party
My BF kitty Mama Mia had recently gone to The Rainbow Bridge at the age of 21 years old (that’s 147 kitty years old!), and I was hoping to fill the empty spot in my heart with another black kitty cat. The good Lord sent me two of them! 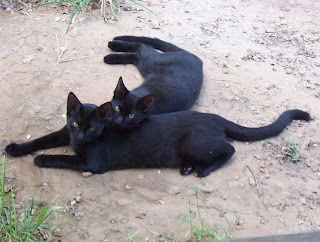 Were rescued from a dumpster out in Lakeway along with 2 other siblings by a friend when they were about 4 ½ weeks old. They are identical twin boys. Skritch wears a red bell collar, and Skratchy a blue one. That helps me to tell them apart. They are also juvenile delinquents! 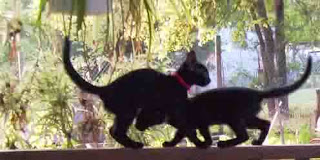 Skritch has a purr motor that would sooth any savage beast! Skratchy is mischievous and likes to pick on Squeek. Squeek is the Queen of the Pride though, so Skratchy is largely unsuccessful in his antics!

Jakey's Furdoggies
Posted by Jakey the Clown at 12:59 PM No comments: 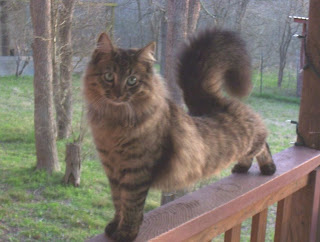 SQUEEK
(also known as The Tail & Her Royal Squeekness)

I found Squeek in the neighbor’s back-forty when she was 5 weeks old. By the time I found her, she had been mewling for help for so long that all she could do was squeak – thus her name! She was SO hungry and her fur was all matted up and full of burrs. 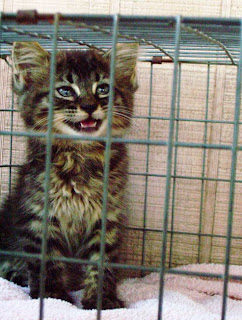 “Poor baby! Of course you can come home with me! I hope you like doggies?”
Turns out that Squeek not only likes doggies, she thinks she IS a doggie! 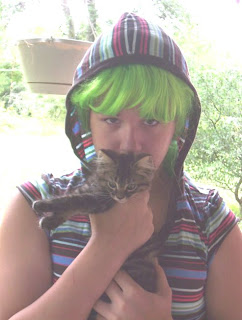 Squeek will be 3 years old on April 10th (that’s 21 years old in kitty years!).
I’m going to bake her a tuna cake with catnip candles – her favorite!!

Skritch & Skratchy
Posted by Jakey the Clown at 11:35 AM No comments: